Upon arriving back at camp, Ghevont was cross with Azrak and Galyn for taking a bandit as a slave. Nebula laughed aloud. Globo didn’t seem to notice. Ghevont argued that the former bandit was likely a fellow follower of the Anointed One, therefore not be to taken into slavery, least of all by a dwarf. (The eastern sects closer to the empire’s center consider demihumans second class to humans). Despite the bluster, the matter was not settled when they bedded down.

Given Azrak’s condition, they agreed he must return to Lah for a healing. The next morning, the bandit slave was not found, though none of their belongings were gone. Most of the party suspected Ghevont of turning him loose, but he remained silent on the matter. Azrak, Globo and Ghevont saddled their horses and rode back towards St. Orlan and then on to Lah’s Retreat. 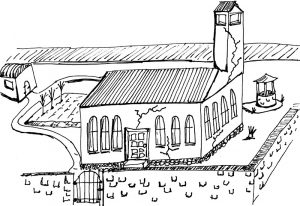 The rest of the party stayed to explore the dilapidated manor and wait out the return of their companions. As they approached a rusting gate, skeletons around a ruined cart rose up to attack. Vilmar chased off the three human skeletons and the rest of them beat down the animated skeleton of a mule.

Once inside, they circled the main manor house to explore a well. Ferris pulled a dirty sword from a lifeless skeleton. They left the black water of the well undisturbed.

Burning Down the Barn

Next, they explored the barn. Inside they found zombies milking zombie cows. Vilmar held the zombies at bay as the party backed out. Ferris lit a pile of moldering hay on fire. Soon the wooden roof fell down inside the stone walls of the barn. They easily finished off the burned up zombies.

As the fire subsided, they fetched a silver bucket that seemed undamaged by flame. A pitchfork stuck in the hay was ruined by the fire. 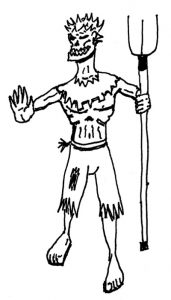 Turning to the garden, the party disturbed seven zombies, including to child zombies swinging hoes. Once again Vilmar was able to turn away a few zombies, but the rest inflicted heavy damage on Ferris who is not well-suited for strenuous combat. Though ineffective at dealing damage, Tienarth played his role of distractor as Nebula and the two clerics smashed the zombies to bits.

As the combat concluded, they headed out of the manor grounds to rest and heal. They were not interrupted during the night. Fresh healing spells put Ferris back into good shape and they headed for the front door.

Through the front door, they found a dining hall littered with unmoving skeletons and tableware. Shrill laughed blasted them, followed shortly by a ghost-like monster flying out of the fireplace. They knew it was undead and a despite Galyn’s confidence in his effort, he was not able to turn the horror away. Naturally, Nebula and Ferris drew their magical weapons, hers a dagger and his the shortsword Wurmslayer. As with the battle with the succubus, Nebula’s dagger weilding carried the day. A couple of magic missiles from Tienarth finished the job. They felt lucky to have quickly defeated what they concluded was a wraith.

Through a door, they found a bedroom with skeletons that Galyn easily turned. Tienarth snagged a couple of scrolls. Another door revealed a kitchen and a secret door to a library. Nebula grabbed at a book, it crumbled to dust and she felt a wave of dark magical energy flow over her.

Another secret door led to privy and a staircase. Galyn spied a golden rod poking out of the pile of excrement. He stripped his armor and climbed down a rope to fetch it. He reached out to grasp the golden rod but lost his grip and stuck into the goo. Presently, he cried out from a bite on his leg. Nebula quickly hauled him up from the hole.

They observed a worm crawling beneath the surface of the skin of his calf. Not hesitating, Tienarth stabbed the wriggling shape with his dagger. Galyn cried out again, pulling a dead worm from his leg and then passed out. He was near death, but only just near. They carried his unconcious form out of the manor walls.