The party woke from a night’s rest partly recovered. Galyn’s leg remained sore, but he and Vilmar cast healing spells and they were ready for another day of exploring the rotten manor. They returned through the gate, through the house and considered the scene of the previous day’s events involving Galyn falling into the privy. After considering the oddity of a privy behind a secret door, they mounted the spiral staircase.

Confronted by the Zombie Master

One floor up, they found a room with maps pinned to the wall, faded beyond recognition. The stair continued, and they climbed up another floor where they found several stirges inside a large birdcage. Stirges are terrible, they concluded, so Galyn held the cage door shut with his foot while Ferris stuck his arm though the bars of the cage and waved his shortsword around, killing two the stirges and managing to avoid being bitten. 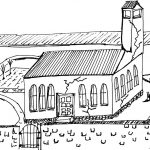 Presently a tall, gaunt man in a robe descended the stairs and demanded that they cease killing his pets. They noted his wrinkled, gray skin and clothing that was once fine but now worn and decayed. They stopped molesting the stirges and considered a retreat. The figure seemed to warm to them and a quiz began.

“What is the current year?” Tienarth demanded. The figure answered 5327, a year far in the past. Ferris wondered aloud if he was a zombie who doesn’t know he’s a zombie. Yet, a zombie typically is never so articulate. The figure explained he was busy waiting for a comet to appear and was annoyed at the intruders. They pleaded with him of the danger of zombie and wraiths in this house. He seemed oblivious, then an idea came to him. He explained his appearance was unintentional. A wand produced and waved transformed his visage into that of healthy man in his 30s.

“You are adventurers, I see, and you clearly seek to fight monsters. Go look for the undead in my graveyard. I have important astrological work to do! Begone!” he shouted as his mood shifted back to annoyance. They retreated but still puzzled over the behavior. Why would he seek to disguise himself and then reveal his true identity? Why did he have no care for the monsters formerly wandering his home?

Walking outside the gate and around the back of the manor, they soon found a graveyard surrounded by a rusting iron fence secured with a padlock, the design of which presented no challenge to Ferris. Inside they found numerous graves, many with the name Wrenwald, some with coffins partially protruding from the soil with large holes chewed through them. Galyn examined one and found it empty. 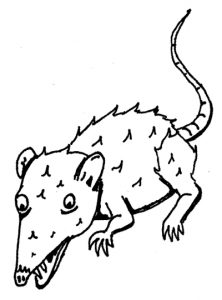 Next, they took note of three above-ground crypts build of stone and closed up with iron doors. Ferris tried pulling open each one with no luck. “Stuck doors,” he announced, and followed that with the idea to dislodge the external hinges with an iron spike. He took Galyn’s maul and began driving a spike between the hinge and the wall.

Suddenly, giant rats emerged from borrows, drool dripping from their tiny-toothed mouths. Four or five rats surrounded each of them and began leaping and biting. Tienarth, Ferris and Galyn sustained significant gashes before the old elf cast a sleep spell that decommissioned all but two rats. Naturally, Galyn also keeled over, overcome by the strong magic. Nevertheless, the final two rats were easily dispatched and then the rest were silently extinguished. A brisk slap to Galyn’s face brought him around.

After finishing the job of destroying the crypt hinges, the iron door pulled free and crashed to the ground. Inside, they found two coffins on ledges. Galyn peered inside one, finding the body of a woman wearing a golden necklace. A short debate about the merits of taking the necklace ensued. Ferris considered it a crime. Galyn considered it a sin. Nebula considered it a treasure and therefor snatched it and stuffed it away in a pouch.

With that, the story paused.