Numerous forgotten temples and tombs associated with Ghot hide in the wilderness, offering danger and treasure for those who dare to tempt the lizard god. This day, Ghot’s evil reached out over the centuries to entangle Tienarth’s Raiders.

The party camped outside the crumbling manor walls, not wanting to explore after dark. Galyn and Vilmar took the last watch of the night and in the morning, they were gone. After an hour of arguing over cold breakfast, Galyn came running into camp. He explained the two of them were kidnapped by bandits during the night but he’d managed slip his bonds and return for help. Ghevont argued for writing off the loss of low-level cleric. Tienarth, Ferris and Azrak agreed to go with Galyn to rescue Vilmar. Ghevont, Globo and Nebula stayed in camp. 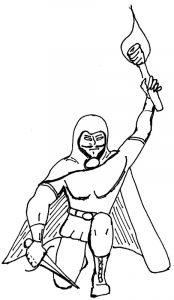 They rode their horses back to the hidden canyon, easily following the bandits’ tracks in the sandy canyon floor to a set of imposing brass door left slightly ajar. A low moan from inside sent a chill down their backs. Ferris looked carefully around the doors and spied a pit trap just beyond them. Azrak remarked he’d certainly have fallen in if Ferris hadn’t spied the pit trap. As it was, they easily stepped around the edges to find a chamber dominated by the statue of a crocodile god. They stood before the image of Ghot but the significance passed over them like a limp wind.

Through a room used as a common sleeping, they wound their way area to a larger room with four jugs of some unknown liquid, the black residue still remaining around the stoppered mouths. They left the jugs alone on account of fear of black pudding. A quick search of a chamber to the left turned up a book amongst rubbish that they could partially understand to be a holy book of the cult of Ghot.

Through an archway, they found a grand room with a sealed sarcophagus. Before Ferris could conduct a proper search, the top tumbled off and a mummy crawled out. They rushed to fight it hand to hand after Tienarth injured it with a magic missile. Galyn swung his maul and was sure he’d land a mighty blow but missed inexplicably. A few words from the mummy and Galyn fled in screaming fear. They shouted to each other about the danger of exploding a flask of oil on the mummy while they surrounded it while the mummy performed some enchantment on itself.

Presently, Galyn and Ferris recovered their senses and they party checked another chamber. Three zombie crocodiles flopped dustily and advanced. They beats the zombies to dust with little trouble. Afterwards, they noted how Azrak’s wounds were healing as expected and then remembered Mummy Rot. Suddenly hit points were that much more of a precious commodity, at least they could return to Lah for a cure of the disease.

Retracing their steps to the entrance, they took a different path and spied a large pool room with black water and left that dead room as it was. Murals of human sacrifices they’d seen earlier suggested nothing of value would be in this room. They knew to fear the stench of reptilian evil, but still they did not recall the legend of Ghot.

So onward they crept to see a profane ritual conducted, a dagger hovering over a helpless victim. Ferris sprinted silently behind the high priest and drove his sword in his back, though it was a glancing blow, he and other twelve men in white robes were surprised. The party quickly descended upon them.

A pitched battle began, with Azrak and the priest trading blows. The white-robed cultists mobbed the four at the command of “seize them!” One cultist grabbed the sword from Ferris’ hand and tossed it aside. Ferris produced Wurmslayer and continued hacking. Azrak fell the leader but the bandits fought on. Galyn struck down on cultist, but the other two tackled him and began squeezing out his life. Suddenly, Tienarth let forth a sleep spell and all but one bandit passed out. Galyn also succumbed, but after Azrak quickly killed the one bandit left standing, they revived Galyn.

Galyn suggested an interrogation. Tienarth argued against this, noting the recent trouble with taking a goblin slave. The prospect of slave mastery was enticing to both Azrak and Galyn. After much deliberation, Galyn killed all but one bandit. This last, Azrak took as a slave. They also freed the girl tied to the altar, though after a near-intolerable time spent discussing slavery, even considering taking her as a slave as well. “Where’s Vilmar?” wondered Tienarth. The girl lead them past a curtain where they found Vilmar among several other prisoners chained to the walls. 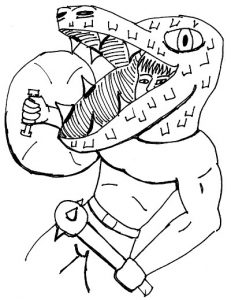 In addition to an earing they’d found earlier, the main altar room gave up a healthy cache of loot. Azrak took a belt with three opals that will fetch 700 gp back in town. Ferris took a ruby earring and an hoop earring, together worth 1,600 gp. Tienarth took sacks of coins.

Galyn took a wooden mask shaped like a crocodile, a wooden helmet of sorts. He felt some magical effect as we wore with with no hesitation. Soon he noticed he could read the hieroglyphics on the altar as if they were written in Common. Tienarth’s glasses confirmed the effect of the mask as they allowed him to read the terrible instructions for sacrifice. This was Ghot’s Crown, a magical device that allows reading words in any language, even magical.

They made haste out of the tomb and back to the others before dark. They intended to return the former prisoners to St. Orlan, and the visit Lah to cure Azrak’s Mummy Rot.