Picking up from the previous session, the party had to decide on their next move. Zetel was not interested in buying the plentiful horses nor even allowing them stay near the inn long. Furthermore, the horses were begging Azrak not to sell them. They decided to bring them with, tying them together with rope. And then they headed south, stopping at Lah’s Retreat. Lah happily accepted the donation of the horses and additional gifts of gold.

Conversation turned to the orc who’d kidnapped Nebula. The story of the necromancer killed months ago caught Lah’s attention. He admonished the party to worry less about the lost tapestry and it’s high value. Instead, he advised, that the troop return to the Altar of Darkness to destroy it. To that end, he provided two large jugs of holy water plus a scroll to be read after dousing the altar. This seemed like a worth quest and after all compatible with finding the orc Badushna and the stolen tapestry. Given the orc zombie they found before in context with the altar’s ability to create zombies, the concluded the orc may have discovered its secrets.

After resting overnight at Yazzi’s crossroad camp, they road directly to the cave entrance that lead to the necromancer’s lair. Ferris explored a bit and found side passages filled with coffins. The party all ventured in, and Azrak began searching through coffins. He found bits of rotted rag and dirt. Otherwise, they were empty. Presently, they heard a door shut. Turning north, they found the old barricade of furniture parts with the same narrow path bashed through it and a single orc zombie. They easily dispatched it.

Moving forward, they made their way to the split in the passage with a pit trap. To the left, they just caught a glimpse of a zombie walking away into the darkness beyond their vision. They dismissed this as mostly harmless and went up the north passage to the prison. Inside, they found piles of dead bodies. Azrak spent 15 minutes cutting off each head, though he paused a few times as his gruesome work included decapitating the bodies of children. Meanwhile, Ghevont spiked closed the door on the south wall. Then, they opened the north door, expecting the altar. It had moved, or else they misremembered where it was. Down the passage to the west, they found the altar guarded by five zombies. Ghevont turned two of them and the party killed the other three. 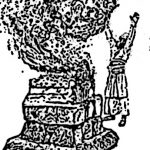 Following directions, Ghevont poured the holy water over the altar and it began to smoke and crack. The holy water flowed down onto the floor to touch the two cowering zombies who soon perished. He read from the scroll, written in the holy language. Cracks in the altar opened wider and out flew ghosts that swirled around the room. Everyone in the party held their breaths, for a battle with ghosts was likely a challenge for which they were not prepared. They released their breaths when the ghosts dissipated and the altar tumbled into pieces.

One of them exclaimed, “with the power of the altar gone, maybe all the zombies created are destroyed!”

Having destroyed the altar, they marched directly to the necromancer’s bedroom where they found Badushna. She accused them of murder and allowed no time for a debate by casting a sleep spell. Unfortunately for her, only Globo passed out, the spell being ineffective on most of the party. Tienarth delivered a magic missile that staggered her. Then Ferris stepped up and drove his blade deep into her chest. The fearsome orc crumpled to the floor. 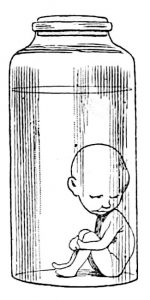 Nebula quickly fell upon the body, pulled a ring from her finger and a dagger from her belt. Suddenly they heard a squeaky voice cry, “let me out!” On the desk lay a large coffer and a bottle, inside of which was a tiny being who looked like a little man. He explained he was a slave of the orc necromancer and needed to be released. Ferris began looking carefully at the coffer for traps and locks. Ghevont cast a protection from evil spell and announced he’s smash the bottle. Nebula wanted to open the bottle. The stood back as she pulled the cork. Out flew the little imp who grabbed fast to the coffer. He zipped past the party and out of the room, dragging the coffer with him as if it weighed nothing. They rushed after him and saw as a door closed. Through the door was a round room with a shaft of light illuminating bat guano on the floor. The imp had stolen the treasure and flown up and out of the lair.

Tienarth wondered if the tapestry was somewhere in the rooms, so they searched for some time. They returned to an alchemy lab with bottles, a book and a cauldron. Ferris could make out some of the text in the book. He decided to keep the alchemy manual. Globo thought about knocking over the cauldron, then realized the tarlike liquid was actually a block pudding. They retreated.

Another room contained six motionless zombies in armor, five orcs and one ogre. Were they recently destroyed along with the altar, they wondered.

Their quest concluded, they determined to return to Lah who had promised to remove the unknown curse upon all of them.