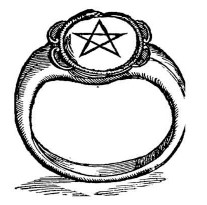 Found in the evil temple, this golden ring was chosen as personal treasure by Azrak. The setting contains a flat ruby inscribed with a black pentagram. Written inside the ring is the magical command work, Kojadeesay Besta. Within a moment of reflection, anyone holding the ring understands wearing the ring and speaking the command word allows conversation with animals.

After the first use of the ring, Azrak discovered that he had an overwhelming desire never to part with it.

Generally, animals have the intellect comparable to a young child. They do not have much vocabulary or even a complete grammar. When they speak with the ring wearer, it may be experienced as spoken words but is equivalent to individuated concepts floating into consciousness. Nor can they understand complex ideas. If asked a question, their reply might be like a fuzzy vision of an object, such as a sunrise in response to a question about which direction a villain headed. They cannot understand numbers beyond none, one, two and many. They can answer yes-or-no questions, but they will convert maybe into either yes or no due to a tendency to black and white thinking.

More than a year after its discovery, the cursed ring was revealed to be one of delusion. All apparent operation was a sham, the product of Azrak’s imagination.