The party made haste to leave Morgansfort behind, so much haste in fact, that they left behind two magical mirrors, two horses and their female fighting dwarf. Off they rode, sleeping in the coach with the tapestry strapped to the top. At sunrise, they arrived at Yazzi’s camp. The horses were tired and had to be fed and watered. They party relaxed with a hot breakfast from Yazzi.

A scruffy old man in a long beard and no clothing but a loincloth rolled out of a hammock and engaged in conversation with Globo. Put on some clothes, begged Globo to no effect. The old man explained he only wore this minimal outfit, not even shoes. He was an adventurer with a long history, bumming around from place to place. On his way down to Morgansfort, he spotted a fearsome monster-faced humanoid with horns who could fly and turn invisible that he described as a genie. He stayed well hidden as the genie moved on, offering a lesson to these younger adventurers in staying out of a fight when prudent. The party maddly began debate about the monster, concluding it must be a Efreeti.

This is a typical metagaming experience: Tre and/or Henry flip through the rule book to match the description to the monster while Jeff draws upon AD&D lore. Half the time they are wrong in some way. The warning foreshadowed the ultimate encounter.

After a few hours, Nebula arrived at camp on her pony along with Azrak’s horse. Naturally, she had no opportunity to retrieve the mirrors left back at the church inside the fort. All together again, the party rode north again. After a few miles, they came to Lah’s Retreat, a monastery at the foot of towering, solitary peak to the east with the waters of a bay beyond. They watered horses again but did not stay long. The priest there bid them farewell as they headed north again to the ferry at Zetel’s Crossing. 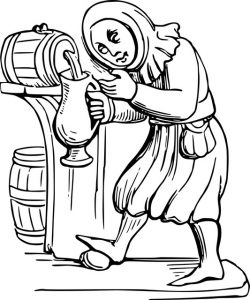 Zetel operated The Dancing Frog Inn and the ferry service over the Beleniasa River which a half-mile down stream emptied into the bay. A few miles to the south, those with keen eyes can spot the island of Carsea, on which it is remembered sleeps an abandoned mining village.

Is there not an inn with the same name in Slateholm, the party wondered. Zetel became agitated, for he claimed the crooked Jolar had stolen his good name. Zetel himself built this fine inn and installed the ferry service more than a decade ago and now Jolar trades on that good name with his own Dancing Toad. As proof, he offers the fact that frogs can be heard singing from the banks of the Beleniasa, and to refer to the dry, disreputable toad for his establishment was a disgrace. Nebula, ever suspicious, even vengeful, of Jolar gave hearty support for this insult.

This bit of drama came from less-than-perfect improvisation that I turned into a good story. Plus, it continues the thread about how Nebula hates Jolar, something that Audrey brings up whenever Slateholm is the topic. Now the rest of players offer up this reaction for Nebula despite Audrey not being present.

Zetel offered for sale mugs of Amphibian Ale and rooms for the night. Ghevont bought rooms for the party and Azrak ordered ten mugs of ale for himself. He proceeded to quaff one after the other, and midway through the third tipped over and lay still on the floor. It was an expected event when anyone indulged in the strong brew and everyone else just let him lie there.

In the common area, a tough-looking adventurer in leather armor sat at the bar. In one corner, a dwarf and man both in red jackets talked quietly, mugs in hand. In another corner, four pilgrims win simple robes with hoods shared a meal of stew. Holy symbols hanging from chains marked them as followers of The Anointed One.

The Red Jacket Rangers, the party learned, had recent come down from Slateholm to address the sudden appearance of flying demons at a nearby farm. The party wondered if they were the same gargoyles they’d fought on the road weeks before, mysterious gargoyles susceptible to the Hold Person spell. Ghevont maintained that no gargoyle could be affected by that spell since it only affects humanoids whereas gargoyles are humanoid-like. Furthermore, those gargoyles crumbled into gravel upon death, unlike the gargoyles described in his school books.

In the morning, a great debate began between Azrak and the rest of the party. They knew that a giant stone hive pushed out of the ground and demons flew out. The demons were killed, but surely there was some sort of treasure inside. They party agreed to go explore–except Azrak, who argued strongly for going straight to Slateholm. His greedy dwarven sensibilities dragged him towards a quick exchange of the tapestry for gold and more training. Furthermore, Azrak longed for dragonscale armor. The party only imagined this type of armor after hearing about the town of Dragonpit. They did not even know exactly how to get to Dragonpit. Nevertheless, Ghevont promised Azrak the dragonscale armor would be his eventually if the came along to the demon hive.

Ghevont also offered that without Azrak, the party could die. Dying was exactly that Azrak wanted to avoid. A bit of fear gripped him after having narrowly avoided death by snake bite recently. Eventually that party won him over and Azrak went along begrudgingly. In the midst of the argument, though, Azrak affirmed his disbelief in The Anointed One and instead professed belief in a dwarven god his refused to name.

Nick himself was really struggling with keeping his favorite character alive, even suggesting that everyone make new characters. It’s as if he wanted to retire this character at 5th level. He showed genuine ambivalence with playing the character lest he die. In the end, the players convinced him.

The party walked up the trail next to the river to find the rude stone hive jutting up from a small hill next to a farm. The farmer came running out to explain the situation. The hive pushed out of the ground suddenly and flying demons were killing his livestock. The Red Jacket Rangers came and killed the demons but had not interest in exploring the structure afterwards.

The party climbed the hill to examine the new landmark. On one side, they saw a gray stone tower pushing upward from a hill, a rude violation of an otherwise serene grassy field. The tower was 80 feet across at the base, tapering somewhat as it reached more than 100 feet above ground level. About halfway up, a rough opening exposed a dark chamber beyond. Around the back of the tower, another opening only 10 feet off the ground yawned as a savage mouth. Ragged curtains hung from the top of the hole flapped in the breeze, and a thick rug spilled out, hanging down two feet and ending in tattered threads. 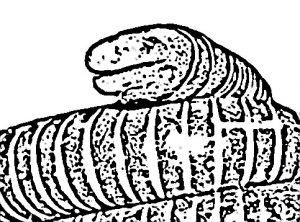 The party climbed up the back entrance, avoiding pulling the rug too much and spilling a box of swords on them. Inside, they spied a vertical shaft with smooth walls and narrow hallways to the right and left. Presently, a giant Caecilia squirmed out of the passage to the right. After biting Globo, the party pummeled it with blows, and after it was dead, they hacked it into pieces and pushed it out the opening. In the side chambers, they found coins and gems among the trash, plus a potion.

Loot set aside, the party examined the vertical shaft. Looking up, they could see faint light outlining an open doorway 30 feet above and directly opposite. Looking down, they could just barely see the bottom with lantern light. They wrapped a rope around Ferris and lowered him down.

Passages led in four directions. To the north, was an open door was blocked by a superb statue of an orc with a mug of beer in one and playing cards in the other. To the the east, he saw an open doorway. To the south, the passage was blocked by an iron gate with a 2 foot hole cut roughly at floor level. To the west, he saw a closed stone door. They pulled him up.

Ferris next attempted to climb the smooth walls of the shaft to the opening above. He slipped halfway up, but with the rope still tied around this waste, he didn’t fall as far as he might have. After resting a moment, he succeeded in reaching the doorway. From there, he affixed the room to a sconce. The rest of the party carefully climbed up. They could see directly out to open sky, doubtless the opening they saw from outside. In side passages they heard shuffling feet and the growling of dogs.

Ghevont produced a mirror and spied around the corners. He could see zombies to one side and dogs with glowing red eyes to the other. Despite a battle in past months against a horde of zombies that nearly wiped the entire party, they discounted any significant risk. The rest of the party guessed the dogs were hellhounds, but Ghevont was skeptical. So, he lept out to turn the zombies while Globo and Azrak stood at his back to hold off the dogs. A quarter of the zombies backed away from Ghevont brandishing his holy symbol, and large hellhounds surged forward to engage the two fighters. Ferris lobbed burning oil over the heads of the zombies which they could now see numbered more than twenty. 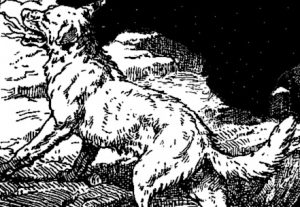 The hellhounds stood two abreast, with five other waiting behind as they snapped at the fighters. Ghevont turned another handful of zombies as some of them shuffled into the burning oil. And then, one of the hellhounds breathed a blast of fire that torched Azrak. Globo managed to dodge it. And still, they fought on. A third attempt at turning back the zombies fizzled, and the remaining crowd pushed forward.

As the zombies pushed, at one point knocking Ghevont down, the hellhounds continued to snap and threaten to breath fire. The hounds began to fall, but others stepped up. Tienarth fired a magic missile at one of the hounds, followed up by a web spell that momentarily kept the hounds at bay.

And all at once, fire bathed over Globo, who fell backwards and lay still. Azrak, too, was overcome. Ghevont turned to heal Azrak, who seemed to cling to life. Ferris stepped up to hold off the zombies to his best ability. The web burned up, freeing the hounds.

Globo was dead. And Azrak’s breastplate was melted into his chest. As he fell, it the leather straps snapped and a gruesome expanse of charred flesh gushed thick, red blood. Ghevont revived Azrak with a healing spell, then stepped up to fight the hounds as best he could. Azrak crawled over the Ghevont’s pack to fetch holy water vials. Finally, the hounds were put down, but the zombies were pressing forward, knocking Ferris on his back.

Ghevont made a fateful decision. He pull the magical sword from Globo’s hand, the one so powerful versus the undead, Morto im Morto. His vow was broken, but the sword obeyed him as he cut down zombies in a desperate gambit to save the party. A good number of zombies still huddled at the back of the room, but Ghevont could feel the light of The Anointed One fading from his body. The party quickly tied another rope and scaled down the outside of the tower to safety.

The farmer met the party and helped them inside. Perhaps the great Lah, would consider a miracle to bring the fallen Globo back to life, he suggested. It occurred to Ghevont that only a powerful cleric might help him repent and restore his powers. He went to sleep in the hay of the farmer’s stable, turning this thought over in his mind.