Spooked by the rat attack, the party returned to camp away from the graveyard and waited six days for Azrak and Ghevont to return. Clerics and Lah’s Retreat gladly healed Azrak’s mummy rot for a sizeable donation to the church and they rode hard back to the remote manor where the party relayed the events of the previous days. Despite some curiosity about the confused wizard inside the estate, they all decided to return to the graveyard to open the other two crypts. 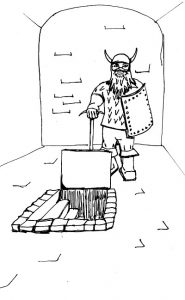 In the second of the crypts, they found two coffins with decaying bodies. The moment Ghevont sprinkled holy water over the dead body of a lady, it sprang up to attack. Another zombie rolled out of the other coffin. However, unlike ordinary zombies, they found these to be quick in their movements and immune to the blows of non-magical weapons. Regardless, they were dispatched quickly. Aside from the jewelry, one of the monster wielded a staff of some sort of clerical importance.

The third crypt contained a simple dead body they left undisturbed. Thunder roared in the distance when they entered, and Ghevont noted clouds in the distance. They also spied a trap door in the floor, which they pulled open to find narrow stairs leading down. The 3 foot wide stairs hugged the edge of a cylindrical shaft 30 feet wide. At the bottom, a single passage led north, flanked by two statues of angelic maidens in a pose that pleaded for them to enter the tombs beyond.

Down a short passage and through an unlocked door, they found a room thick with dust except for footprints along the western wall. A single coffin contained an inert skeleton. A curtain hung on the north wall was pulled aside to reveal a door, which Azrak pulled open. He hesitated to enter and instead pushed the coffin through the doorway. A moment later, a heavy log crashed down from the ceiling, smashing the coffin. Azrak chopped the log in half to clear the passage and they moved on.

A door to the left opened easily to unleash a hellish stink that caused much coughing. Inside the room, a ghast relined in a coffin reading a book by candlelight. Innumerable books stacked waist high clogged the room. Ferris rushed into the room the strike what he assumed was a ghoul who screamed an alarm and dashed past them out of the room. Ferris gave chase down stairs, through a lighted room and into room with an open stone sarcophagus where he overtook the ghast.

His path blocked, the ghast whirled and slashed claws over the tender flesh of Ferris Blood, who suddenly froze in paralysis. Ghevont paused to bless himself with a spell for the protection from evil. Azrak rushed to catch up in his heavy armor. Tienarth remained in the first chamber to peruse the many books. The two clerics, Galyn and Vilmar stayed with Tienarth, uncertain of purpose.

The ghast resumed his hollering about intruders and sped into a darkened passage. Azrak followed a full speed, found the passage to be magically dark and beyond his dwarven vision. He crashed into a wall then carefully made his way around a corner to open a door to a room filled with rate feces except for a well-worn pathway to a staircase leading up.

Azrak kicked open the door as Ghevont stood behind him. The well-furnished room beyond hosted two figures relaxing in armchairs, a man and woman, listening to the babbling the ghast they were chasing. The man stood and spoke to Ghevont, “you don’t want to disturb us!” Whatever terrible charm might have been cast, it fizzled to no effect. At that moment, Ghevont took note that no shadow cast upon the wall behind the grim figure.

The next moment, Azrak slammed the door shut and drove an iron spike in the floor. A terrible crash to the door seemed to stretch the timbers which creaked but stayed firm. Azrak ran back to the entrance. Galyn and Vilmar carried the stiff Ferris up the stairs, and the entire party escaped from what they concluded was a vampire. They stacked the heavy stone doors from the two other crypts over the trap door, hoping to keep the horror from escaping. The sun still shone above, but would this effort be enough after nightfall?