The next day, Globo’s body still lay motionless in the new grass of the field outside the farmer’s cottage. The weary party rubbed the sleep from their eyes. The farmer’s wife offered them a breakfast of porridge.

The farmer led them outside as his son returned to the farm with an old man leaning on staff. It was Lah, the revered cleric of Lah’s Retreat. He looked over the party one by one and then to the lifeless body of Globo and finally to the obscene demon hive on the nearby hill. “That,” he said, “is an abomination that must be cleared out and destroyed.”

Turning to Globo’s body, he declared “This boy can come back, if his spirit agrees and the Anointed One allows.” They knew he meant the miracle of resurrection.

Turning to Ghevont, he said “You have walked a dark path of late. And He has turned away from you for betraying your oath never to shed blood by blade.” Evidently, the old man could read spiritually the tale of Ghevont’s recent use of a sword in battle. “You can be redeemed, but there is a price. You will find redemption only by blood and fire. Boy,” he said turning to the farmer’s son, “build a bonfire. And you, fallen cleric, strip yourself to your birth state. ” By this, he meant for Ghevont to strip naked. “Take this blade you wielded and carve a cross on your chest,” he continued. Ghevont hesistated. He seemed to pray silently, and then he carved a deep cross into his flesh. Blood streamed down.

Ghevont held his arms wide and stepped into the bonfire. Suddenly the fire raged, flashing into a tower of flame and doubling in intensity. Just as suddenly, the flame ceased. The cut on his chest was now a cauterized scar and he was otherwise unharmed.

“I can see you now feel the warmth of the Lord’s attention again, and your powers are restored. However, He has revoked some measure of free will. Never again will you break your oath against blades.” Ghevont quickly dressed. He was humbled, but also strengthened in spirit. He placed Morto im Morto on Globo’s body.

Lah directed them to build a bed of evergreen boughs, on which they placed Globo’s body. Lah knelt over the body and whispered a question: did Globo want to return to life? “He says he’s had a good life, but would return if the party wanted him to return.” They nodded. Lah began saying prayers. The charred body began to stitch together and heal. Moments later, Globo’s chest heaved a long breath. Within minutes, his body was whole but he remained unconscious. “He must rest for some time, and he won’t be the same, but he will join you again on your adventures,” declared Lah.

“We must clear that demon hive,” concluded Ghevont. The party climbed back in the entrance an coaxed the zombies from across the shaft. Senselessly, the zombies stepped forward and tumbled down into the darkness. A wet splat followed each one.

The party went up and found nothing more than corpses of zombies and hellhounds. Ferris climbed up another 50 feet to a level with four landings and four doors. With the aid of the rope, they climbed up to join him. At the first door, they heard the meowing of cats. Azrak opened the door and they found a giant mouse corpse being set upon by four owlbears. Tienarth surged forward to shut the door. Ghevont immediately placed a spike in the floor. The party cross the shaft as the owlbears threw themselves against the door which eventually broke apart. So, they threw flaming oil and drove the monster back into the room, out of sight.

The next room contained four statues, each holding a bowl containing pieces of gold and gems. Ghevont made to wrap a rope around one of the statues and it sprung to life. It was a gargoyle. Tienarth fired off a magic missile. Then another statue came to life. The fought the gargoyles well and they were tossed down the shaft. The two genuine statues were pushed out of the room to the landing.

Ferris stepped over to another landing and heard the faint sound of slapping beyond the door. “It’s like someone’s throwing pasta around,” described Ferris. He opened the door and saw three 7-foot worms with purple bodies and white heads topped with tentacles. He quickly closed the door. The party made ready and then rushed the worms. Tienarth put one to sleep. Azrak and Ferris cut down the other two. 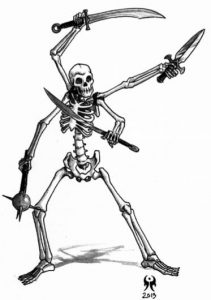 Meanwhile, the fire burned out and the owlbears began to frenzy. The party began tossing more burning oil. The monsters couldn’t step across the gap of the shaft, but they were getting very agitated.  With fire burning all around them, they lept. Two fell down the shaft immediately. Two cross sideways to the landing not yet explored. Still, the party kept firing missiles and oil. One owlbear died by arrow and fire. The other made a leaping charge and hung at the edge in front of the party. A few strikes helped it lose its grip and it too fell down the shaft.

One last room remained to explore. They opened the door to face a bone golem. Tienarth cast a web spell that the golem shrugged off. Azrak and Ferris swung their magic weapons. Heavy blows rained down on them from four maces. Ferris was close to death, and Ghevont healed him. Then, Tienarth commanded his magic rope to affix to a statue. Still, mace blows smashed Ferris and Azrak. Tienarth wrapped the other end of the rope around the spine of the bone golem. Ferris and Azrak stepped away as Ghevont pushed the statue down the shaft. Suddenly the golem was jerked down the 120 feet to the bottom of the shaft.