Per twenty quick questions for your campaign setting:

What is the deal with my cleric’s religion? There’s a state religion centered in a huge empire far to the east. They worship The Anointed One. The religion is relatively new, historically. It rose up soon after the appearance of undead. Only humans are clerics. The church considers demihumans as flawed and perhaps dangerous. Influence of the church in the west is limited.

Where can we go to buy standard equipment?

Where can we go to get platemail custom fitted for this monster I just befriended?

Armorers likely may be hired in Slateholm, but armor for monsters may not work out there. Folk likely will direct you to Dragonpit for exotic craftsmen.

Who is the mightiest wizard in the land?

Siahac (SEE-ah-hak) lives in a giant pyramid west of Dragonpit. Most people assume he built many of the obscene dungeons filled with terrible magical devices of his own invention.

Who is the greatest warrior in the land? Nath, the barbarian king rules an unknown land to the north.

Who is the richest person in the land? 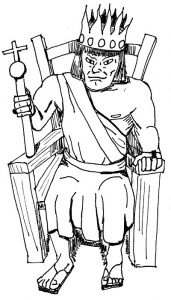 Emperor Elian IX Mercoservus Piesvivamont claims ownership of the whole of all known lands and lives in an opulent palace in the east.

Where can we go to get some magical healing?

The travelling potion master supplies Morgansfort with healing salve. It sells for 50 GP and heals 2 HP. Stronger healing potions are rarely available but sometimes found in Slateholm or in dungeons. Adventuring clerics are often found in the temple or taverns in Morgansfort.

Where can we go to get cures for the following conditions: poison, disease, curse, level drain, lycanthropy, polymorph, alignment change, death, undeath?

The great cleric Abramsh leads the congregation in Slateholm and will heal serious maladies for generous donations. For magical maladies beyond the power of clerical healing, adventurers are cynically advised to endure their suffering or risk a worse fate by seeking the help of Siahac.

Is there a magic guild my mage belongs to or that I can join in order to get more spells?

There is no magic guild. Many magical treasures are shipped east, but Benabil the Halfling in Slateholm sometimes will offer a scroll for sale.

Where can I find an alchemist, sage or other expert NPC?

Morgansfort boasts a sage with excellent abilities in identifying treasures. It’s a necessary element of the tax system. Other experts likely live in other secluded outposts or towers. Naturally, experts of all sorts frequent Dragonpit due to the brisk trade in dragon parts pulled from the mire.

Where can I hire mercenaries?

A steady of flow of green adventurers come in to Morgansfort. More seasoned hirelings are available in larger settlements.

Is there any place on the map where swords are illegal, magic is outlawed or any other notable hassles from the law?

There are few rules in the western lands. To the east, within the empire proper, there are various restrictions, especially those that suppress demihumans.

Which way to the nearest tavern?

Drinking of inebriating beverages is ubiquitous. Taverns fill streets and can even be found along well-travelled roads. What monsters are terrorizing the countryside sufficiently that if I kill them I will become famous?

Gnolls from south of Morgansfort are becoming troublesome, and goblins have been raiding wagons recently. The most feared threat current are orcs because a prophecy tells about the destruction of the fort by an orc horde.

Are there any wars brewing I could go fight?

The empire fights a slow war with barbarians in the north with Nath’s Bear People. Battles are not fought during the harsh winter, but General Stozar has reignited the northern campaign every spring for a decade.

How about gladiatorial arenas complete with hard-won glory and fabulous cash prizes?

Gladiator combat is an ancient tradition in the empire but unknown in the west.

Are there any secret societies with sinister agendas I could join and/or fight? Yes, if you can find them, unless they are only myths: Night Lepers, The Returners, The Ears of the Lord, The Order of the Hound, The Unalloyed, The Spectre Society, The Elders of the Expansive Waterway.

What is there to eat around here?

Farming techniques are feeble. Game and fish are plentiful. Wild grains are harvested for making ale and then the meadows are overtaken by forest. More efficient farming is done inside the empire.

Any legendary lost treasures I could be looking for?

Siahac’s pyramid is considered to be filled with his treasure collected during his unnaturally long life. Additionally, five lost treasures are often listed in folk tales and songs.

The Scarlet Blade was a three-masted ship that sunk while returning to the eastern lands. Sailors sometimes claim to glimpse a red glow from the depths that they are sure is from the magical light of gems carried by the ship. The shrine and tomb of Ghot the Lizard God is somewhere in the swamps south of Morgansfort. The mummified body of Ghot still clutches a scythe with an obsidian blade that is said to sunder all armor.

Herlukort’s Cache has drawn many adventurer’s to their doom in the eastern deserts. The mad dwarf headed past the Arena of Gazz to bury his wagon of platinum but was never seen afterwards.

The ancient black dragon Nahud fought his final battle in the air above modern Dragonpit with the elf Zehaus, a fearsome wizard. Nahud swallowed Zehaus whole, including the wizard’s many magical devices and his jeweled wand. Moments later, the great dragon plummeted to the ground, creating a large pit. His body instantly turned to a tar-like goo. To this day, toilers dive into the goo to find his scales, still perfect condition despite at least 10,000 years.

The iron mine of the halfling Noss was the most productive mine in ancient times, aided by some sort of clever magical device. Jealous dwarves tunneled around the mines and causes them to collapse in fiery explosions. Somewhere in the rubble are the Noss’s secrets to high mining production.

Where is the nearest dragon or other monster with Type H treasure? Siahac is more fearsome than any dragon and the location of his pyramid is well-known.