The Paralyzing Gaze of Iron 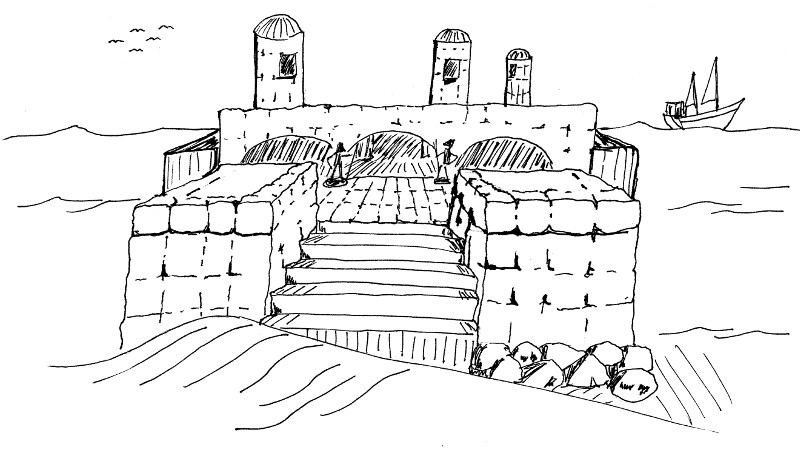 Azrak hopped out of the boat and affixed it by rope to a rock near the bottom of the stairs, as a second boat of pirates rowed close. Among the four pirates was Galyn, recognized by his gaudy reptile headdress. He’d stowed away on the ship. In the distance they heard a bell on the ship toll, growing softer as it headed out to hunt the merchant ship. Fog lingered over the morning and obscured the jungled coast. Various birds chattered indignation.

Azrak spotted the lone crab atop the stairs and began a dialog. The crab challenged Azrak to personal combat, though Azrak persisted in negotiation. Losing some patience, Ferris sprung from the boat and skewered the crab through the shell with his two-handed sword. Presently, Ferris and Azrak mounted the platform and met the gaze of two iron statues. Though misshapen by corrosion, they were plainly recognized as lizard folk holding tridents. Azrak felt a chill run the length of this short spine. Ferris suddenly froze and toppled over.

The gaze of the statues was determined to be the cause, and after Ferris recovered, he and one of the pirates tossed blankets over the statues. On this wide but shallow platform were three open archways into a dim chamber. The southern side the platform on either side of the stairs were more archways leading south. 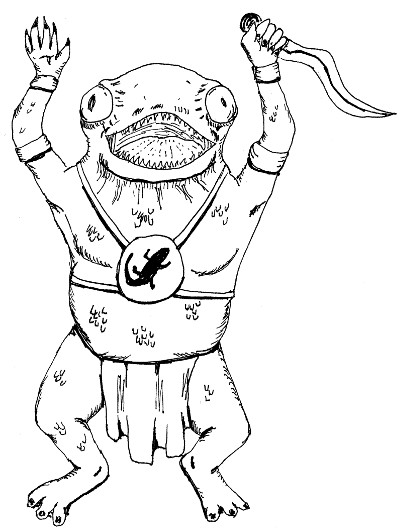 The pirate Onie knelt to light his lantern and then thrust it into the darkness through the archway. Bloated and decaying bodies sprawled over the chamber. He instantly recognized them as his former companions, the initial search party. Amongst the dead were six fish-headed humanoids gripping kris knives. The entire party rushed into the chamber to do battle.

Before long, the fishheads joined the pirates in death. Onie was badly injured, but Ghevont rewarded his bravery with a healing spell.

Galyn pushed open the secret door behind the statue on the east wall. Onie’s lantern revealed brine lapping softly against the bottom of the stairs. Galyn caught the glimpse of tentacles gently undulating attached to a huge jellyfish. Azrak waded into the water and thrust his face into the water in order to converse with the senseless animal.

The friendly jellyfish promised not to attack. Galyn waded into the waist-deep water to pull on a door across the room. It sprung open with such force that Galyn was thrown across the small room. Behind the door was solid wall, a cruel trick though not a deadly one. Subsequently, they noted no other doors out of the room. Azrak asked the jellyfish who had no idea of exits.

The climbed the stairs to return to the chamber with the statues.

Next, the party checked the secret door in the north wall. It too lead down steep stairs into about three feet of water. The bottom of the stairs offered choices of left or right turns. They quickly found another staircase diving down underwater to the north. Onie and Azrak attempted dives and caught views of a room down under the water. Further exploration seemed impossible due to lack of air.

Death on the Edge of  Kris

Moving beyond the waterlogged stairwell, the party came to a room where more fish-headed monsters lounged. One reclined on a stone platform while three others waded in the waist-deep water. All four wore platinum jewelry that gleamed in the light of Onie’s lantern. Wasting no time, the party rushed to attack.

The monster on the platform raised his hands and gurgled an incantation in a strange fish language. A net of magical protection spread out over the hideous fish men. Ghevont cast a spell of his own and fired a spiritual hammer that struck the leader. The next moment, the leaders revolting eyes moved independently to focus on Ghevont. His alien language sounded like boiling mud, and the words stung Ghevont like a paralyzing jellyfish tentacle. He was held in place, helpless. Another fishman lept upon him and began gnawing at his arm, releases brillant blood into the water.

Another fish man cast a spell of his own that froze Galyn in place.

Azrak turned on his heel and began sloshing back towards the stairs back to the dry chamber. His companions begged him to return, but he was adamant about not getting his backpack wet. The water was up to his chin, so he’d been holding his full backpack over his head. Calls for him echoed after him uselessly. 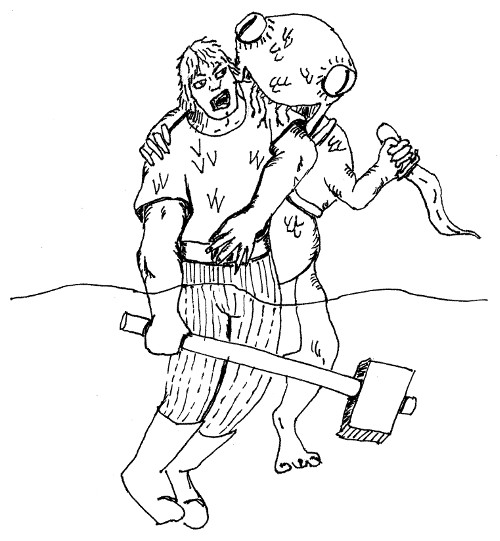 Giving into a sense of desperation, Tienarth let loose an arcane lightning bolt that briefly illuminated the room and struck the leader directly in the large lizard-engraved medallion. The menacing fishman merely laughed in a way that reminded them of coughing and vomiting. The lightning bolt presented no harm.

The next moment, the leader cast yet another spell, this time upon his kris knife which lit up with a blue fire. He stepped up to engage in battle.

Wracking his brain, Tienarth produced the wand of illusion taken from the zombie wizard. Aping the illusion cast against him, he fired a silent illusionary fireball at the fishmen. Three of them appeared fooled, flinching as imaginary flames licked over their scaly flesh.

The fishman biting Ghevont dove into the water perhaps to extinguish the false flames but then swam swiftly past the party and towards Azrak. Moment later, it sprang up the stairs to meet Azrak who had just gripped his crossbow. Azrak bashed ineffectively at the monster with the butt of the crossbow.

Meanwhile, the leader of the fishmen fell upon Galyn, biting him again and again until blood poured from innumerable teeth punctures. Before long, Galyn fainted, collapsed and slipped under the water, lifeless.

Three of the pirated continued a campaign of pelting fishmen with sling bullets and Onie stood before them holding the lantern above the water and fending off attacks with his spear. Alone, a landed stone posed little harm, but the many that landed began to add up, and this encouraged a fishman to step up to challenge Onie. A few slashes of a kris knife were enough to gut the brave pirate. The lantern splashed into the water and was extinguished not unlike its owner.

The remaining light came from the blue flames of the fishman leader.

Use Your Illusion Two (Times)

Tienarth, all this time dodging attacks as best he could as melee raged around him, suffered several terrible wounds. He momentarily lamented the retreat of Azrak, whether it was cowardly or senseless. He recalled a battle long ago with a carnivorous ape, where Azrak lay bleeding and Tienarth strained his weak limbs to drag Azrak to safety. With some regret, Tienarth cast his invisibility spell in order to escape. He knew that if he fled now, all of his companions would join Galyn in death.

Half a minute later, Tienarth made the hard choice to give up his invisibility in a desperate second attempt at an illusionary fireball. This gambit could have meant instant death, for Tienarth’s injuries were dire, and any simple blow might kill him. Even falling unconscious likely meanth death in waist-deep water.

Fortunately, like Axel Rose singing Bob Dylan, the fishmen were suddenly knocking on heaven’s door. The leader and one of the others pitched back into the water, believing themselves dead. Darkness fell upon the chamber as the leader’s knife went below the water, but Ferris quickly dropped his sword to fetch the glowing blade. Ferris and the three remaining pirates redoubled their battle against the remaining fishman. Ferris slew him just as the flame winked out, returning the chamber to darkness. Meanwhile, Azrak managed to kill the last fishman at the top of the stairs after abandoning attempts to club the monster with the crossbow in favor of swinging his axe.

Ferris and the pirates bound the up the two unconscious fishmen and then stabbed them, offering no chance of more spellcasting while they were butchered.

Presently, another lantern was lit and they dragged all the bodies up to dry land. Four sets of fine platinum jewelry were stripped from the fishmen. Azrak argued for having one complete set of the odd items which were engraved with a reptile motif. Tienarth pointed out the obligation to the pirate crew to split recovered treasure. Ghevont and the remaining pirates offered that plans may be to double cross Tienarth’s Raiders, but nonetheless, distribution of treasure was not yet in order.

The party was badly hurt and it was only midway through the first day. Azrak asked the pirate ship to return after three days, which gave them time to hunt down a merchant vessel they’d spotted. Could the crew survive a night in the waterlogged temple?

You can’t go in the water with a backpack.