Two weeks have passed since the temple of St. Orlan was freed from the clutches of the Succubus. Word had made it to Lah, who sent Globo and two clerics, Galyn and Vilmar, to St. Orlan for support. The church did not want to let the truth of the intrusion to be well known, and work was done right away to cleanse the lingering evil.

Tienarth’s Raiders were enjoying a meal and ale in the river ward at an outdoor beer garden with a view of the river and an ancient bridge. Suddenly, the peace was disturbed by a scream. Zombies were shuffling over the bridge, clawing at helpless townspeople. The party rushed up to the zombies. Ferris and the two warriors luckily were wearing armor and had their weapons handy. 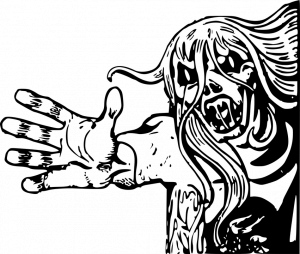 The zombies surged forward, many times knocking Azrak on his back and clawing him. Globo seemed to cleave one zombie after another. Zombies hurt the unarmored Ghevont badly, but he managed to help Tienarth with a Protection from Evil spell. The zombies continued a dull strategy of throwing themselves on top of who they attacked, wrapping their rotting arms around the victim and dragging him down to the ground. Other zombies would push in and bite or claw. Repeatedly, Azrak would be pulled to the ground, stand up and then be pulled down again.

Slowly the zombies were whittled away, and then Tienarth stepped to the side to drop five of them with one lightning bolt. Despite many bites and scratches, they managed to defeat the zombies within a few minutes.

Presently, the sheriff arrived with guards. They built a bonfire on the opposite side of the bridge to ward off the zombies. The party retired to the inn and in the morning the sheriff offered supplies if they planned to go investigate Tosasth. They were agreed and rode out the next morning. Down the main road, they went, until they found the old cutoff for Tosasth, so overgrown it could hardly be considered a road. There was evidence of recent treading, presumably by zombies.

The road wound between grassy hills divided by valleys of trees. They camped amongst ancient oak trees and were not interrupted by monsters or animals. Early in the morning, Tienarth awoke from a dream and felt compelled to relate it to the party. He said, “I was sitting at a desk piled with books. I was crying. Suddenly, our dear deceased friend Chubb’s head floated down from heaven. He kissed my forehead. I then began tossing each book across the room. Each time I did, the floor shook. When I tossed the last book, it flew into the air, shrunk and flew into my mouth. And then a blast ice shot from my mouth.”

They packed up and continued on the road until they came to a small estate surrounded by a wall. A swampy area lay behind the estate, and a rusting gate hung limply before an inner garden. 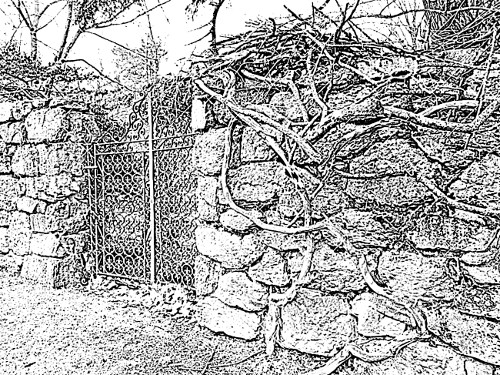