Fresh from clearing the crypts, the adventurers shared drinks at the tavern and met three new arrivals: a warrior and two elf mages. Summoned before the general, they were handed an ancient map showing much of the second level under the fortress. As the arrived at the island, Blasmo and Fred showed up, making a party of nine. As they found before, such a large party creates chaos, much more chaos than the inexperienced adventurers can handle. The lack of focused proved reminded them survival in the dungeon requires focus.

Back in the Dungeon

Down in the dungeon, the party immediate stumbled on a giant worm-like amphibian, which Azrak quickly dispatched. During a search of a corridor, Chubb was attacked by stirges, but those too were defeated quickly. The party skirted the north end of the dungeon not part of the donated map, found a new way in and out and then fell upon four giant beetles. That battle, too, went well except that impatient characters in the back foolishly hurled weapons through the crowd, twice sticking other characters in the back.

Past the beetles, they found a locked chest with a meager 262 silver pieces. And then, a blank passage that they knew must hide a secret door if their map was to be believed. Yet, half an hour of searching found nothing except for voices beyond the wall. Finally, the cleric Ghevont spied a rock that clearly opened the secret door. The party set about an ambush.

In a mad dash, the door was flung open to find six surprised hobgoblins. The warriors waded into battle. Darryyl threw a burning flask of oil that burned up half of the hobgoblins. And the rest were defeated in seconds. Unfortunately, a party of gnolls heard the commotion and burst into the room to attempt their own ambush. Though not surprised, the party was ill-equipped to fight six gnolls.

Throughout the session, Chubb and Ninjah chattered away, distracting themselves. Frequently, the the other party members had to nudge them focus on the action. As this last battle began, Chubb found himself close to the action, too close in fact. He let fly an arrow at close range, sticking a gnoll who rushed up to swing his battleaxe, cleanly severing Chubb’s head. Within seconds, the party was in dire straights. Azrak took two wicked blows, and Kreger was struck a mortal blow. He stumbled and fell sprawled on the floor.

There had been much bragging about the lack of party death in recent encounters. Here now the characters once again felt the icy hand of death snuff out two lives and begin to squeeze at the necks of the rest of them. But rather than turn to flee, they steadied themselves and pushed forward. Blasmo distracted the gnolls with a voice that seemed to come from behind. As they turned, fearing an attack from the rear, the party lashed out with renewed advantage. 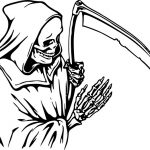 In the end, Darryyl struck the last gnoll with his staff and a calm silence draped over the party like a burial shroud. Their longtime companion, Chubb lay in two pieces, his spirit permanently separated from his lifeless body. A solemn rite was spoken over his body after it was buried on the island. His skill with the lockpicks was noted, and the party bid him farewell forever.

Consequently, the party will be looking for a new thief soon.